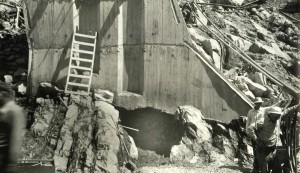 The U.S. Army Corps of Engineers completed a federal Feasibility Study for the Matilija Dam Ecosystem Restoration Project in 2004, along with a joint EIS/EIR co-sponsored by Watershed Protection. Congressional authorization followed in 2007, however costs to implement the federal Project plan quickly escalated above the authorized cost ceiling due to complications from and community concerns with the proposed approach to sediment management and disposal.

To address these challenges, stakeholders convened a working group to oversee development of an alternatives analysis for the Project. This analysis considered additional engineering and design approaches successfully utilized in other recent large scale dam removal projects, which helped to demonstrate that natural sediment transport was a feasible and cost-effective solution for the Project.

With strong support from a diverse group of stakeholders, the Design Oversight Group met in 2016 and selected – with near unanimous agreement – a new approach to sediment release and management through “Uncontrolled Orifices With Optional Gates.” Shortly thereafter, the Matilija Project Funding Committee was established, and since 2017 has been working to assist Watershed Protection in developing critical funding pathways for all components and phases of the Project. (The accompanying Matilija Dam Chronology below provides a concise history of key moments for the dam and related events over the past 80 years, from 1940 to present.)

Design plans and updated environmental studies for dam removal and most essential downstream components (and construction of a new bridge starting in 2021) are currently well underway thanks to a series of planning, design and implementation grants provided by the State of California from 2017-2020. Strategic support from the Resources Legacy Fund, Patagonia, Inc., and other non-governmental partners has also been key to the success of these efforts.

1940    Viable steelhead/salmon population (over 5,000) and other wildlife/natural resources

2009    Renewal of Matilija Dam operations agreement between Casitas MWD and VCPWA-WP, and transfer of the Matilija Conduit to Casitas MWD

2014    Board of Supervisors approves contract